Research and the Bredesen Protocol

What is the Bredesen Protocol?

Video on the Science behind the Bredesen Protocol

Quick Background of the Protocol

Dale Bredesen, Professor UCLA Department of Neurology and Professor at the Buck Institute for Research on Aging in California, developed the “Bredesen Protocol” with other researchers at the Buck in 2011 to address cognition based on functional medicine.

The ReCODE Report is a personalised plan based on the Bredesen Protocol and one’s test results.

Read below for published papers relating to the Bredesen Protocol, as well as other studies which have shown efficacy of lifestyle changes to prevent, slow, or reverse cognitive decline.  And further below are more details on the background of the protocol.

Below are some of Professor Bredesen’s published papers (note, we are not making claims regarding the contents of these scientific papers but providing links with the published titles. We make no claims as to the efficacy of the protocol nor the published results). Further research is needed. Large scale random double blind placebo studies have yet to take place.

Professor Bredesen attempted in 2011 to start a trial in Australia (hear about this in the video linked at the end of this page), however, with the pace, structure and approval process for these types of studies, it is our hope that within the next 10-15 years we may see progress on a trial of this nature.

A small ethical board approved study on the Bredesen Protocol has concluded in the USA and results are below.

We encourage you to click on the hyperlinks below to read details on each published paper. If you do not understand the content or outcomes, you may print off each study or email the links to your doctor, a researcher, or other health care professional for interpretation. The Bredesen Protocol does not claim to be a “cure”.

Results of 2021 Clinical Trial of the Bredesen Protocol

Following on from the 100 cases of documented reversal of cognitive decline (10 cases being from our clients), the first ever formal trial with 25 participants aged 50-76 with MCI (pre-Alzheimer’s) or early dementia, which importantly was independently assessed, showed highly statistical improvements in cognition, functionality and even growth of parts of the Brain on MRI scan.

The next step would be a larger trial with a control group but this trial is yet more evidence that the protocols may be highly effective.

Read more about the trial here (currently in pre-print – to be peer reviewed):  https://www.apollohealthco.com/clinical-trial-results-2021

10 of the cases are our clients in New Zealand and Australia. 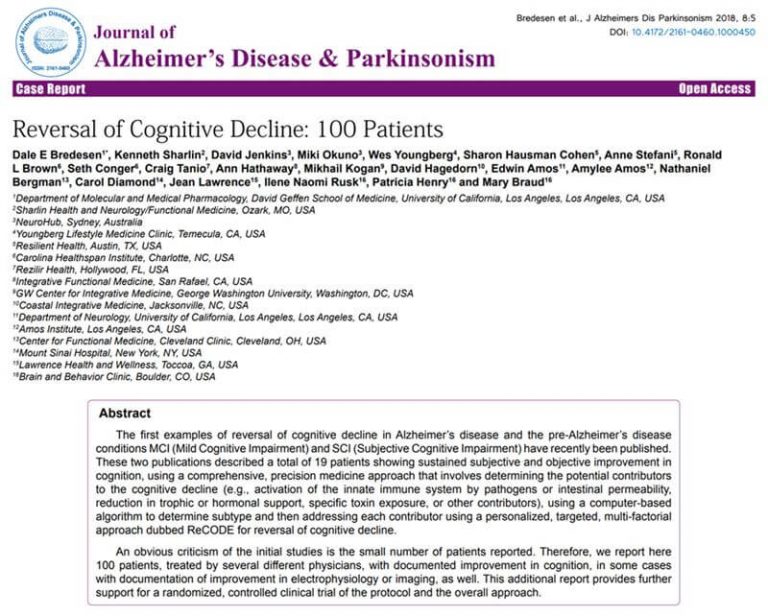 Published papers by other authors based on or inspired by the "MEND"/Bredesen Protocol:

Other researchers are discovering that lifestyle protocols may be showing a positive outcome on cognition.

Below are links to other studies relating to lifestyle factors and cognition:

The well known FINGER Study published in 2015 recruited 1260 older adults in Finland with increased risk of dementia “’Both the intervention group and the so-called placebo group, where we gave regular health advice, improved during the two years’, said Dr. Miia Kivipelto, MD, principal investigator and professor at Karolinska Institutet. ‘But the improvement was much higher in the intervention group, in all of the [cognitive] sub-domains: executive function for [information] processing (how quickly people are able to do different tasks) and complex memory tasks. And the risk of cognitive decline was 30% higher for the control group compared to the intervention group.’”

The 2017 Train the Brain Study in Italy of 113 MCI subjects aged 65–89 years
States: “In conclusion, a non pharmacological, combined physical and cognitive training in a social setting improves cognitive status of MCI subjects and improves indicators of brain health. The improvement is a small effect size. However, as pointed out by Ngandu et al.17, even small size effects in these initial stages may result in considerable gains in terms of public health. This underscores the importance of interventions aimed at multiple lifestyle factors as possible strategies to reduce or delay dementia conversion in MCI subjects, thus reducing dementia incidence.”
Maffei, L. et al. Randomized trial on the effects of a combined physical/cognitive training in aged MCI subjects: the Train the Brain study. Sci. Rep. 7, 39471; doi: 10.1038/srep39471 (2017).

Background of the Bredesen Protocol

Professor Dale Bredesen published over 200 papers during his 30 years of research in neuroscience and neurodegenerative diseases. You can read Professor Bredesen’s detailed CV for more information on his history. Below are explanations on the Protocol from Professor Bredesen’s book, trainings, and presentations, we are not making any of the below statements as our own.

In his book “The End of Alzheimer’s”, Professor Bredesen describes in his protocol over 36 parameters or “holes in the leaky roof” which may lead to degeneration of the brain, which (according to his theory) may be why mono-therapeutic drug approaches have thus far been ineffective, as plugging only one hole may not fix a “leaky roof”.

Professor Bredesen and other scientists theorize that Alzheimer’s Disease is triggered by multiple factors that lead to Beta Amyloid Plaques, Tau Tangles, brain cell death, and synapse retraction, which may be contributors to memory loss and Alzheimer’s Disease. These factors may be unique to each individual, and may include genetics, metabolic parameters such as glucose and insulin levels, low Vitamin B12 and Vitamin D levels, high homocysteine, inflammatory parameters such as CRP levels and/or reactions to heavy metals and toxins such as common moulds.

The series of case studies we co-published in 2018 detailing the reversal of symptoms of 100 cases of cognitive decline gives hope for further research. Over 1000 practitioners have been trained in the Bredesen Protocol, whilst being fully transparent that further clinical studies using the Bredesen Protocol are required, and a small ethical board approved study is underway in the USA.

If you wish to understand more about the protocol, please read Professor Bredesen’s book “The End of Alzheimer’s”, and check his company’s website for further scientific references.

If you are interested in our services, please contact us. We look forward to helping you and your loved ones and to working alongside all other dedicated practitioners.

Video below of Professor Bredesen presenting the science behind the protocols. Hear some of the participants in the early trial describe their experience. Those who stayed on the protocol are still doing well, 9 years later.

Great explainer video by “The Worthless Professor” on what is the Bredesen Protocol. Be sure to watch all 4 videos in the series.